Every musician is searching for a specific sound. A sound that corresponds to his acoustic imagination. It could be a sound from his favorite record or it could be a completely personal expression of a musical idea. The question is always the same: How do I get to that sound? I want to pass on some ideas and information in this and the following articles to help you, as musicians and guitar freaks, to better understand your guitars and basses. This understanding should help you get to your sound. Every guitar sounds – but the question is how does it sound? There are many adjectives used to describe the character of the sound: warm, round, brilliant, transparent, etc.
The tonal character of an instrument as we hear it is not a simple oscillation or vibration, but a complex mixture of various frequency elements. The combination of these tonal building blocks gives a unique characteristic to the audible signal. The source of this special tonal character lies in the physical properties of the materials and construction methods use to create the instrument.

Let’s take a closer look at a specific group of these frequency elements – the harmonics, or overtones. Most guitarist are familiar with using harmonics by lightly touching the vibrating string at the 12th, 7th or 5th fret, creating a high, bell-like tone.The harmonics stand in a direct mathematical relationship to the fundamental note played, such as an open string. The graphic expression of this relationship is visible in illusration 1. Mode I corresponds to the fundemental frequency, e.g. A=110 Hz or the open A string. The next four modes represent the first four overtones: A=220 Hz, E=330 Hz, A=440 Hz and C sharp=550 Hz. 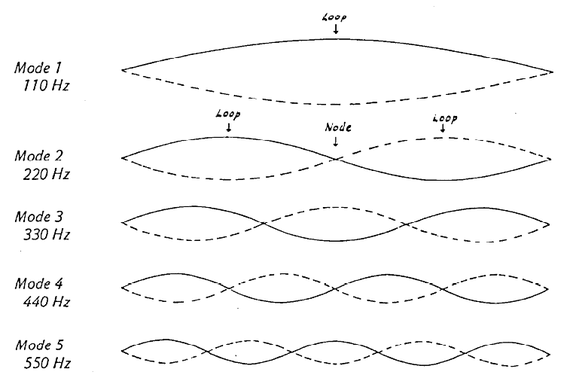 A vibrating string spontaneously creates these overtones and the acoustic character that we hear is the sum or combination of these related frequencies. We refer to this combination as the Harmonic Series. Illustration II shows a harmonic series composed on the fundamental note plus the first two overtones. 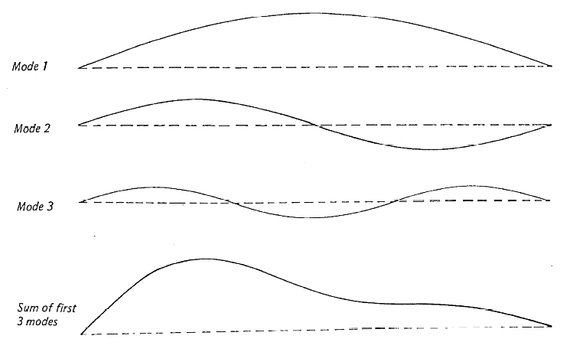 In general it can be said that harmonic series consisting of relatively low value overtones (e.g. the fundamental plus overtones 1-3) result in a warm, well rounded tonal character while a series containing a large number of high value overtones will tend to be harder and more brilliant.

There is another important factor to consider: the inherent resonant frequencyof the material used to build the instrument. This refers to the vibrational character of the construction material. While this has traditionally been wood, in the last years the use of metals (Kramer, Travis Bean), plastics (Lucite bodies) or composite fibers (Steinberger, Modulus Graphite) has expanded the traditional horizons. Furthermore, experimentation with wood impregnation techniques has altered the character of the woods themselves. The use of these materials is the single most important deciding factor in determining the sound of an instrument. The vibrational energy of the strings is transmitted to the body and neck through the bridge and nut. The body and neck start to vibrate. How they vibrate depends on their resonant frequencies. This vibration is sent back to the nut and bridge and affects the vibration of the string – which is sensed by the pickups.

As you can see – it is a closed system where each part affects the other. The sound you hear is the sum total of all of the parts. It is impossible to make a Les Paul sound like a Strat. Why?
Imagine you have a wooden Xylophone. All of the tone blocks are the same size and the grain of the wood runs the same in each block. The only difference between the blocks is the type of wood. When we hit each tone block we get a different tone, namely that tone which the physical properties of the wood determine. Among these properties are specific gravity (S), hardness (H) and Young’s modulus (E=Elasticity). Depending on the size of the blocks used and their thickness the sound can also change. These factors we will sum up in the proportionality constant(k). Considering these factors we can express the resonant frequency of the wood as follows:
kH
F = resonant frequency =
SE
Let’s calculate a simple example to show the relative (not absolute) frequencies of various woods.

Practically speaking, a guitar make out of basswood will tend to have more highs than one of ash. European walnut would lie somewhere in the middle, while american black walnut, which is much heavier would sound more like ash. We can take two useful general assumptions from this formula:
The lower the specific gravity (the lighter the wood in weight for
a certain size), the higher the note given.
The softer the wood, the deeper the sound.
Again here we can see that a Les Paul with a mahagony neck and body (we will ignore the maple overlay for the moment) cannot sound the same as a Strat with an ash body and maple neck. Woods with low resonant frequencies sound warm and round while those with higher resonance sound brilliant.
The early Strats were made of a very light ash. This ash was more like the Japanese sen than the white ash used today. They tended to be more transparent in sound than most of today’s instruments due to the higher resonant frequencies. When the switch was made to alder for the L-Series instruments, the sound changed to a bit rounder and warmer since the alder was a bit softer. The changes became stronger as the lacquer changed. By dipping the bodies in polyester and using harder polyurethene finishes instead of nitro-cellulose based lacquers, the sound becomes harder and more brittle. All of these changes go back to the physical properties of the materials used.

Conclusion: Each piece of wood has it’s own unique sound. This sound is determined by the physical factors specific gravity, hardness and elastici ty. The resonant frequency on the wood inf luences the overtones and the resulting harmonic series, which determines the tonal characteristicon the guitar . The woods used for guitar construction should be measured by their sound characteristics first and aethetic beauty second. As a guitar builder I am dedicated to the creation of musical instruments, not furniture.